The 1950s and 1960s, many Big Island plantation companies published periodic newspapers—a combination of an employee newsletter and a community newspaper.

​The Hawaiʻi Plantation Museum has an archive of newspapers from some of the plantations. Copies of select issues are available for inspection at the museum.
We will also be sharing digitized versions in this site.

Hawai’i statehood generates strong feelings. Celebrated by some as a great leap forward for the Territory of Hawaii, many people see statehood as one more betrayal of the indigenous Hawaiian peoples.

At the time of statehood, most every newspaper in Hawaiʻi published a special edition celebrating statehood. Many chose the moment to offer a retrospective, fitting in the story of the local community and the new State. All told from the point of view of the newspapers’ publishers and editors.

The plantation newspapers were no different. In 1959, 8 community newspapers on the Big Island collaborated in producing a combined statehood edition. We offer this compilation “as is,” reflecting the issues and perspectives that the papers’ editors chose to share at the time.

The material is diverse. For example, the Onomea Echo leads with a story “What We Think About Statehood For Hawaii” that includes the perspective of plantation managers,  workers and other community members. The issue includes many stories chronicling the achievements and progress of the Onomea Plantation on several fronts, including mechanization, industrial safety, and housing. The paper still made sure that timely community news such as “Cub Scouts Have Field Day Fun" was in the mix. 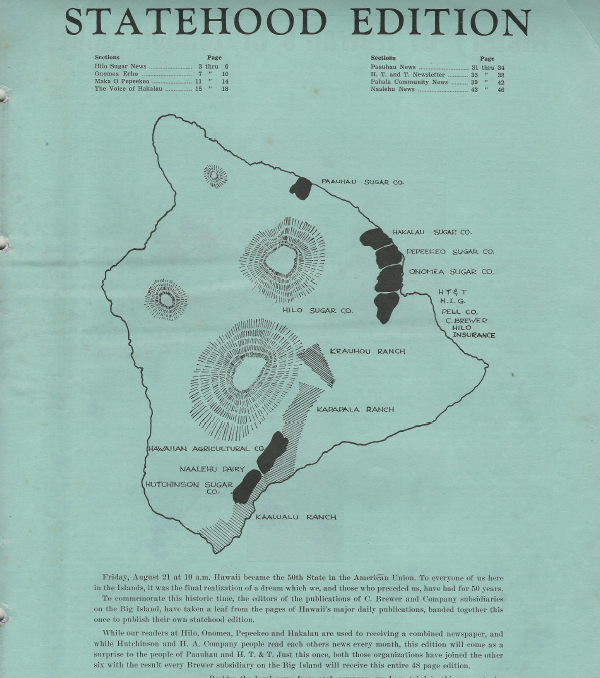