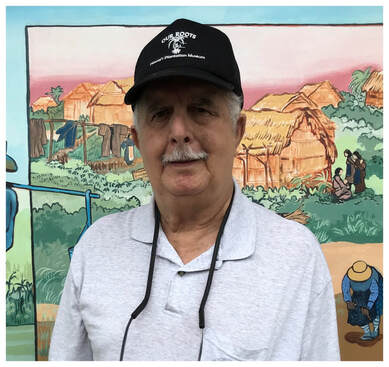 Hawai'i Plantation Museum was founded by Wayne Subica Sr, he was born in Ola'a and raised in Mt. View on Hawai'i Island. He grew up in the plantation camp with his parents and siblings. His father was a plantation worker at the Ola'a Sugar Company. Wayne graduated from St. Joseph Elementary & High School in 1961 and University of Hawai'i at Hilo in 1978 with a degree in General Agriculture.

After graduation, Wayne Subica accept a job with the United States Department of Agriculture Natural Resources Soil Conservation Services. Often traveling to Ka'u for work, that is when Wayne’s collecting journey began.  He’d spend most of his afternoons out in the field with farmers and ranchers digging and searching for any old artifacts he could get his hands on. His home displayed many old glass bottles, an antique 50's soda fountain, jukebox, and even a vintage Pepsi machine that still operated and was always stocked with cold sodas and beers for his family to enjoy. In 1999, Wayne finally retired from his government USDA job and was in search of a new hobby to keep him busy.

Wayne devoted many hours of research, meeting with colleagues, and enjoying phone calls to obtain information on the countless artifacts he collected throughout the years. After retiring he spent many days at the Hawai'i Public Library researching every microfilm and newspaper they had.

In 2004, Wayne opened his first museum in the former Ebesu’s Flower Shop on Keawe Street in downtown Hilo. At the time, Wayne was very influential in bringing the Pony League to Hawai’i Island, and so his museum showcased more of a sports theme. Operated by Wayne and a group of dedicated volunteers the museum thrived for four years until a bigger space was needed, as Wayne’s collection quickly outgrew the 1,500-square-foot Hilo shop.

With all his extensive years of researching, meetings and interviewing Wayne wrote and printed his first of book about the Big Island Moms and Pops stores in 2006. His interest for writing books grew and he began to work on Volume II and then Volume III of his "Moms and Pops before Wal-Marts & K-Marts" book. Currently, he has written about ten books with titles known as Hawai'i Sugar Days, Hilo High School Champions, Historic Ho'olulu Park, Hawai'i Plantation Pay System, Looking at Yesterday, Today Hilo, Hawai'i and a few others. He writes these simple history books to share with people so they can make connections that are easy to understand.

In February of 2013, Wayne welcomed visitors to the new Papa'ikou location at the Old Yoshiyama Store on Old Mamalahoa Highway. Today the museum is operated by our dedicated and hardworking group of volunteers including a few of Wayne's family members. Wayne's vision for this museum is to have a place that display and highlight historic artifacts, people, lifestyles and the multi-culture heritage of old Hawai'i from past to present.

​We invite everyone to come visit us at Hawai'i Plantation Museum, we look forward to seeing you all. Mahalo!
​